HANOI – The capital of Vietnam → What to see?

Hanoi the capital of Vietnam (Travel guide). Hoan Kiem Lake in the center of Hanoi.

Hanoi is one of the most interesting cities I’ve visited in my life.

My writing style is not that of a “cool blogger“ where I drink coffee.

Behind the wall of a house in Hanoi.

A vibrant city with perfect kitchens – enchanting you with their culinary charms.

Hanoi theatre in the Old Quarter.

The history of Hanoi is extremely rich and has survived to this day.

The main commercial center is Old Quarter with the famous Hoan KiemLake.

In the streets of Hanoi.

Old Quarter has a wide range of accommodation for the travelers.

Hanoi is growing and modernizing. New flats and commercial houses are build.

Hanoi is a wonderful place for a demonstration of French colonial architecture.

It is a worth a visit the Hanoi historical monuments and sights.

The Imperial Citadel of Thăng Long is a good place to relax in Hanoi.

The Imperial Citadel of Thăng Long in Hanoi.

One Pillar Pagoda – a tourist attraction right at the Ho Chi Minh Mausoleum.

One Pillar Pagoda in Hanoi, right at the Ho Chi Minh Mausoleum.

One Pillar Pagoda – a tourist attraction right at the Ho Chi Minh Mausoleum.

Ho Chi Minh’s Stilt House is a part of the Presidential Palace in Hanoi.

Temple of Literature (Van Mieu) – one of the most important monuments in Hanoi.

The Lake of the Returned Sword in the heart of Hanoi is shrouded in legend.

Temple of the Jade Mountain – Ngoc Son in Hanoi.

WHAT TO WATCH OUT IN HANOI, SCAMS IN HANOI:

Propaganda poster in Temple of literature in Hanoi.

The Sinh Tourist – a certified travel agency in Hanoi.

🚖  HOW TO GET FROM NOI BAI AIRPORT TO HANOI:

👜  BEST PLACES TO SHOP IN HANOI:

One of the busiest market street in the city center of Hanoi.

The trip to the Perfume Pagoda and hike to the cave takes the whole day.

Bat Trang – the well known village for the production and sale of ceramics.

The history of Bat Trang village dates back 1000 years.

Where to eat in Hanoi, where are the restaurants and streetfood?

A lady on the street in Hanoi prepares meat for Bun Cha.

You can also go on a “Street food tour“ in Hanoi

Street Food in Hanoi  (Photo „Repast“ from „Isolethetv“ licenced under CC BY 2.0.)

🚍  Transport and how to move in Hanoi: 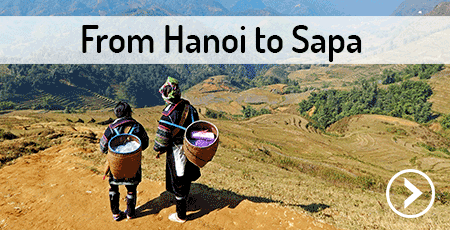 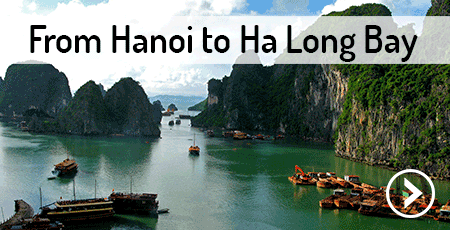 The weather in Hanoi can be divided into two periods. Hanoi has a hot summer with rainfall and dry winter:

SPRING: it is humid, from February to April, the best time to visit, blooming trees and flowers, temperature 15-25 °C
SUMMER: it is hot, from May to August, a lot of precipitation, thunderstorms during the day but also in the evening, average temperature 32 °C
FALL / AUTUMN: considered the best period from September to late November, warm sun and cool breeze, the temperature 25 °C
WINTER: from December to late February, the average temperature is 17 °C, but in themountainous areas may fall below 10 °C
➜ Current weather in Hanoi

📷  Places of Interest in Hanoi:

Where you can go by bus or train from Hanoi?

> How to get from Hanoi to Saigonicon-plane Where you can fly in Vietnam from Hanoi?

icon-arrow-left Go back to places of interest