Ethnic minorities make up approximately 8% of the total population.

That is around 9 million people of the total population in Vietnam.
Kinh (or Viet) residents constitute about 88% of the population and the remaining 4% of the other groups.

THE MOST POPULOUS ethnic minorities:

Most of the ethnic minorities in Vietnam live in the mountainous areas in the north, near the Chinese border to the mountains Truan Son in central Vietnam. In areas that have experienced heavy fighting in recent wars. Their modest dwellings are simple wooden houses with the very simple facilities.
There are often easily identifiable differences in language, physical properties and traditional clothes.

Based on the languages spoken, ethnologists separate Vietnamese residents on 8 major groups that count up to 54 subgroups.

Some of the subgroups can be divided further, e.g. according clothes:

Hmong women in the north of Vietnam.

Most of the ethnic minorities in Vietnam share similar elements in their daily life:

• they live in rural farming lifestyle
• they have a similar village architecture dwelling
• traditional rituals (eg. the appointment of a child after reaching a certain age, protection against evil spirits)
• long history of tribal warfare
• many of these groups are semi-nomadic
• drinking a rice wine is popular with village celebrations

Almost everywhere in the northern Vietnam where is a village, you can watch and see the locals at the work. Whether it’s working in a paddy field, gathering wood, collecting herbs, sale items or food or clothing and fabrics. When you try a homestay, you can try these work with the locals. You will see which such care is about rice and walk with the people on the rice terraces, or go to the wood. Surely you will experience a lot of fun.

Woman from the Hmong ethnic group while working in the wood.

The Vietnamese government is trying with subsidies, better health care, accessibility and education to encourage ethnic residents to move to lower altitudes. Despite this offer, as well as mistrust in the major lowland residents and some conflict in the past, most of the ethnic minorities stay and live in the mountains.

The History of ethnic minorities in Vietnam

There are not to much historical records about the origin of these people. Some groups already inhabited the area of northern Vietnam before the forebears of Viet people came here. Viet residents came already from South China over 4-5 thousand years ago. At certain points the Viet residents differed from indigenous people living at the Red River Delta. They became the largest population group when inhabited the small villages and districts in Vietnam.

Some ethnic groups continued to interact with the Viet people. They decided to maintain their independence in the highlands, or were pushed to the mountain areas. Where they live today. Residents of the 2.biggest group are in Vietnam for centuries, since about 500 A.D. Hmong came to Vietnam about 300 years ago.

The man of the Black Hmong ethnic group in the village of Tavan.

Tay ethnic minority occupies 1st place in the ethnic minorities of Vietnam. While Viet people have 86% of the population, Tay residents have less than 2%. Their number is estimated at approximately 1.7 million. It is estimated, they are in Vietnam already in the year 500 A.D. This group is divided into the another smaller groups (e.g. Ngan, Phen, Tho, Thu Lao, Pa Di). People inhabit the area mainly in the north-eastern part of northern Vietnam, in the provinces of Cao Bang, Lang Son, Bac Kan, Quang Ninh, Ha Giang, in smaller numbers in Yen Bai and Lao Cai.

The culture of the Tay ethnic group is very rich. Starting with traditional folklore and wedding songs, poems, dances and music. The well-known song is “Hat Luon“, it’s called. duet between lovers. During the year, there are a several festivals and celebrations that have different meanings. They are typical farmers and some traditions have persisted to the present. E.g. long tradition in the cultivation of wet rice, digging irrigation canals, threshing grain rice on wooden racks (Loong). The most famous craft of Tay ethnic minority is weaving brocade of original designs, which are highly prized.

Clothes are not so colorful as with other ethnic minorities. Clothes are made of cotton that is dyed indigo color. There is not so much to see the embroidery or other decorations. Women wear skirts or pants, polo shirt and black scarf, men wear trousers and shirt or T-shirt. Thu Lao ethnic minority wears cone-shaped scarf on their heads and Tho ethnic minority dresses like Thai residents of Mai Chau town.

Dwellings are similar to Thai residents, the house is built on the pillars. They use the tiles, straw or palm leaf for building the roof and wood or bamboo for walls. The villages are often built in the foothills and are often named according to mountains, rivers or fields that are located here. Villages are often large and have dozens of homes at once.

Residents of Thai ethnic minority are the 2nd biggest ethnic minority in Vietnam after the Tay inhabitants. Their number is estimated at less than 2% of the total population of Vietnam. Approximate number is about 1.5 million inhabitants. Residents of this minority live mainly in Son La, Mai Chau, Lao Cai and Lai Chau. In the area of Lai Chau and Lao Cai in the north live more residents of the White Thais. While in the southern part of the province of Son La, Yen Bai Mai Chau live residents of the Black Thais. You will meet also the White Thais in Mai Chau. They wear their clothes for cultural performances.

Thai ethnic minority is well known for its beautifully woven garments and other accessories and typical houses on stilts. These houses are designed to protect the residents before the possible flooding and from the dangerous animals. They also provide shelter for their animals.Women retain their habits in dressing, while men received the dress in the style of Viet inhabitants (not yet everywhere).

They like folk dances (Xoe, Sap, Han Khuong) and love to sing, these dances are a reflection of Thai culture. Custom of this ethnic minority is also, that the husband lives in the house of the family of his wife until the baby is born. Then they moved with the child to husband’s family.

HMONG people – one of the largest ethnic group in the north

The Hmong is one of the largest ethnic group in Vietnam (about 1 mil. people). They inhabit mainly the mountainous area in the north near the chinese border. There are different ethnic subgroups and they can be easily identified by the clothes and according to tradition they comply.

The Black Hmong are known for their craft and their traditional indigo blue clothes. The Flower Hmong wear expressive colorful clothes, and it is not difficult to meet them at the marketplaces such in Bac Ha and Coc Ly in Lao Cai province. The Other subgroups of Hmong are White Hmong, Red Hmong, Green Hmong and also Chinese Hmong.

The Hmong came to Vietnam fom South China about 300 years ago, during the reign of Ming and Qing dynasties. This departure comes from their rebellion against Chinese imperialism. The large number of Black Hmong can be found just in Sapa or Lao Cai province.

Husband´s obligation consist in the care of the whole family, he gives a major decisions about the safety and welfare of the family. He is also seen as a major provider of money. His wife must be mainly a good housewife caring for children and preparing meals. Part of the work of women are also handicraft such handmade traditional clothing or jewelry.

For the manufacture of clothes it is used also hemp and indigo color. The Hmong use traditional method for coloring and decorating – batik. Hmong are very well known by this creating of clothes and cultivation of hemp for making clothing. Watch interesting video – Hmong and batiks. 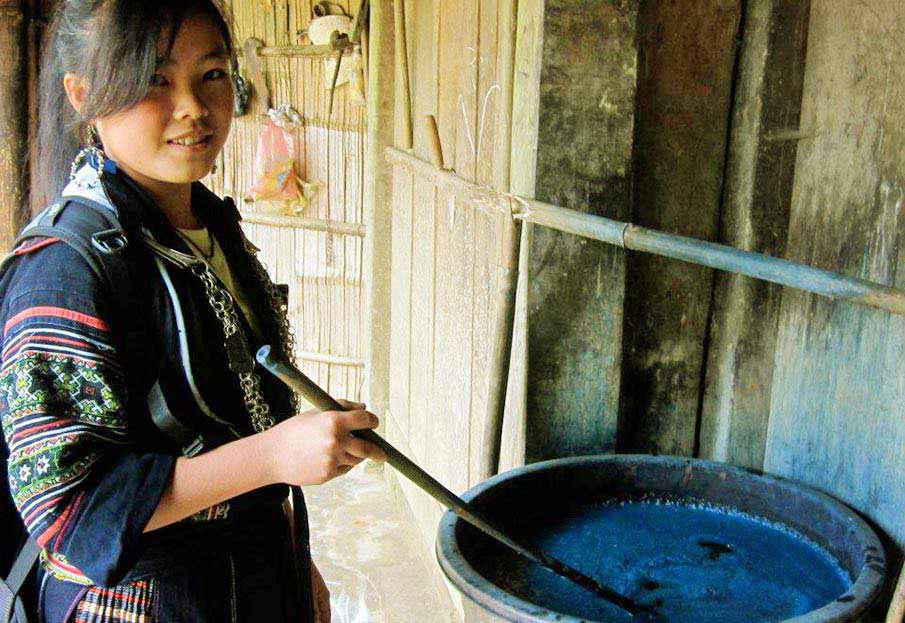 The situation is also slowly changing with the arrival of tourists in Vietnam. Lots of Hmong in Vietnam has left many of their traditions and customs. They adapt to new customs and culture, change clothes or make a business and ride a motorcycle. Hmong live mainly in northern Vietnam and there you can see their simple and difficult life in beautiful natural areas.

Dao is another large group of ethnic population of Hmong language groups but the group of Dao, which can be seen in northern Vietnam. The history of this minority is not fully known. They came from China. Immigrating began between the 12th or 13th century and the early 20th century.

Religion of Dao people has elements of Confucianism, Buddhism and Taoism. Ban House (Ban Vuong) was the legendary holy man and the oldest ancestor of the Dao minority group. The Dao group has population of around 600 000 in Vietnam and is divided into another subgroups (Dao with white trousers, Dao with narrow trousers, Dao with coins, Dao with blue clothes…).

Women in this group are easily identifiable through a triangular red turban / scarf decorated with silver coins and red tassels. Men wear mostly long pants and a shirt and a scarf on head. Family roles is similar to the Hmong. A man has a dominant role in the family, community, and he is also a major economic factor. Woman takes care of the household, their children and the associated work.

Very important is also choose the place where the family will live. Customary of this choice is fulfillment bowl of rice for whole night on this place. It represents the richness of the area, the number of cows, buffaloes, money and property. They follow their dream and when the rice is on this place, family stay here or move to another location. Check out the video about the life of Red Dao people.

Preparing lunch at home of the Dao ethnic group.

Threats and loss of indigenous traditions

Some factors, such as the using of electricity, modern medicine, education, increase of tourism, created a benefits for ethnic minorities. Such a development, however, also brought leaving many century-old traditions of ethnic populations.

• lots population of ethnic minorities already retreated to various external influences
• transition to a new culture or change in traditional clothes with the new modern mainstream clothing
• many ethnic people is assimilated into Vietnamese society
• notification of religious activities to the Vietnamese government
• expropriation of land for new building projects (eg. the largest dam in the province of Son La)
• growing number of tourists who visit the ethnic minorities and evolving trend of commerce
(especially in Sapa and Bac Ha town)

Increase of tourism in the areas where the ethnic residents live, but also gives an opportunity for very poor inhabitants to earn money. Residents in these areas very quickly grasped the elements of a simple business.
They offer their handmade accessories, clothing, trekking or homestay mainly in tourist areas such as Sapa.

Rulles to follow in a village of ethnic minorities

During your travel and trekking in mountain areas you will meet people from ethnic minorities in their villages. It is recommended to follow these rules of behavior:

1. Do not use drugs – use or sale of drugs is illegal in Vietnam
2. Do not touch the sacred objects
3. Dress appropriately (long pants, dresses…)
4. Do not drink alcohol in the village and do not be noisy (you can drink the rice wine in their presence)
5. It is not recommended to kiss in public in the village
6. Be careful when taking pictures (especially the elderly and children, ask for permission and then show the photo)
7. Enter into their home only when you are invited (you can also bring a small gift – eg. fruit and balloons for children)
8. Do not give money and sweets to small children (it is better to give some small items, toys…)
9. You can purchase a handmade object for hospitality
10. If you are invited for lunch or a homestay – of course pay the money

The school in northern Vietnam. 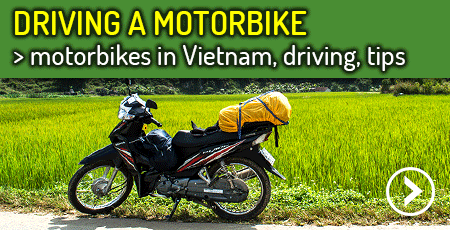 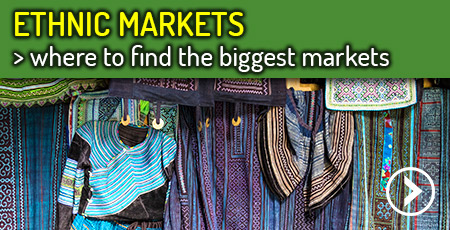