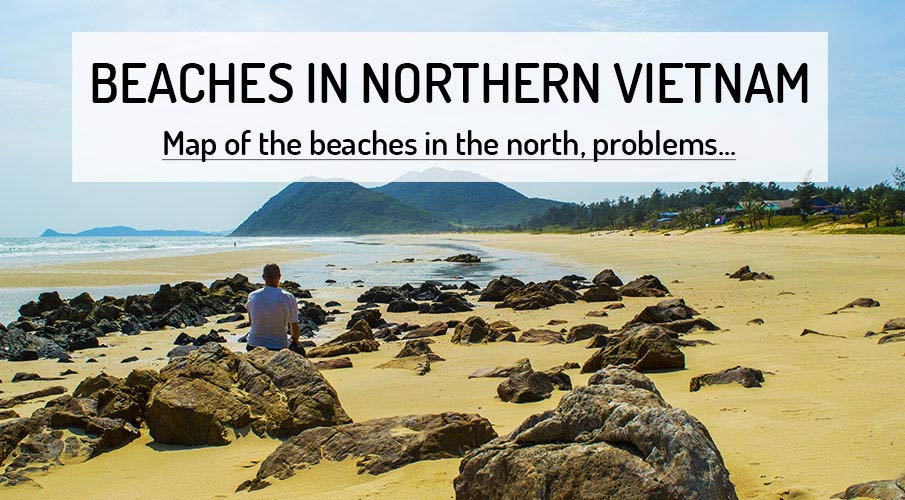 Also in northern Vietnam you can find a nice and large beaches.

Vietnam has a lot of beaches, but we could say, lots of them you will find in central and southern Vietnam. But also in northern Vietnam you can visit some of the nice and very large beaches. Most of them are located in Quảng Ninh province, Thanh Hoa province or Nghệ An province. Lots of beaches are small and they are hidden in on the islands in Ha Long Bay, Lan Ha Bay, Bai Tu Long Bay.

A lot of these beaches are overcrowded by locals and visitors.

Vietnam has almost 100 million inhabitants. And about 15 million foreign tourists visit Vietnam every year. Yes, of course a lot of these people visit beaches or buy boat trips eg. in Ha Long Bay or Cat Ba Island. Lots of these beaches are big tourists sites, but also several of them are visited mainly by locals. It is good to know, the main and the biggest tourist site is Ha Long Bay and nearby beaches and islands.

Beaches in the north of Vietnam – Mapicon-angle-double-down

Numerous beaches you will find in Ha Long Bay and numerous beaches are hidden in nearby islands and bays (Lan Ha Bay, Bai Tu Long Bay). Sometimes it is not so easy to get in some hidden beaches on these islands, you need to buy boat trip or private tour.

Ha Long Bay – one of the biggest tourist site in northern Vietnam.

Beaches in the Thanh Hóa Provinceicon-angle-double-down

Thanh Hóa City and province the same name is about 170 km from Hanoi. There are several large and nice beaches, visited mainly by Vietnamese. It is not so frequented by foreign tourists but mainly by locals. From Hanoi you can go by train (about 3,5 hours) to Thanh Hoa City. It is not so hard to get here.

Beaches in the Nghệ An Provinceicon-angle-double-down

Beaches in the Hà Tĩnh Provinceicon-angle-double-down

Read this article > How to get from Hanoi to Thanh Hoa

A common problem of beaches in southeast Asiaicon-angle-double-down

1. Pollution of beaches > The relatively a big problem of beaches in Southeast Asia is the latest pollution and waste on the public beaches. This problem has affected also Vietnam, and here you will see some beaches polluted or clogged mainly by plastic rubbish. However, it does not apply everywhere and all the time, some beaches are regularly cleaned, especially beaches at the hotel resorts.

Hong Van beach in Co To Island in the no tourist season.

Minh Chau beach in Quan Lan Island in the no tourist season.