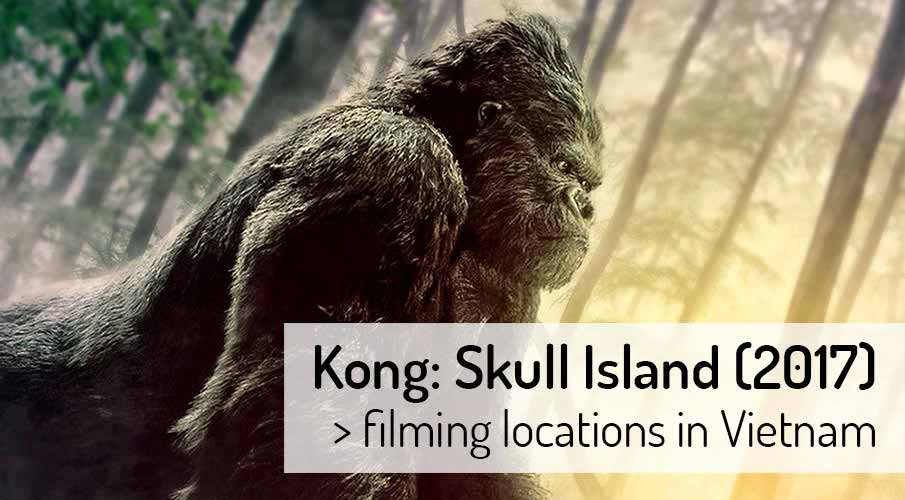 Kong: Skull Island – filming locations in Vietnam. Where to find these places from the movie?

King Kong – it was already filmed several action/fantasy/adventure movie about the famous big ape. The original and the first black and white film has already been shot in 1933 and another bigger fame was finally received in 2005 by director Peter Jackson. In the 2015-2016 was filmed another sequel – Kong: Skull Island (director Jordan Vogt-Roberts). This episode was also filmed in Vietnam (northern and central part), Australia and Hawaii.

Vietnam attracts its scenery directors from around the world almost constantly.

Kong: Skull Island is another in a series of movies that have been filmed in Vietnam. Kong became the largest production filmed in Vietnam (budget about 190 million USD). Among the better-known films we can mention for example: Pan (2015), James Bond (1997), Indochina (1992), The beautiful country (2004), Three Seasons (1999). Scenery, nature and exceptional surroundings in Vietnam attracts and will attract directors from all the world.

Ha Long Bay – one of the most fascinating, but very tourist sites throughout Vietnam. The biggest “tourist attraction” in Vietnam. About 2,000 mountainous islands, islets and karst formations creates a unique place in the whole world. This place was written in UNESCO World Heritage List. Travel agencies in Ha Long already offer a variety of boat trips and trips focusing on the places where this movie was filmed.

icon-angle-double-rightHow to travel from Hanoi to Ha Long?

Ha Long Bay in Vietnam is one of the fascinating places on the world, but also the most visited.

Ninh Binh – another of the filming sites of Kong in northern Vietnam. Neighborhood near the city covers a huge area of karst scenery interwoven of the rivers and rice fields, where it is possible to buy some of the boat trips. This place is also called “Inland Ha Long” because of the similarity with the Ha Long Bay. However, it is significantly smaller than Ha Long Bay, but this region has a great historical significance. Places such as Hoa Lu (formerly a historic capital of Vietnam), Trang An Landscape Complex and Bai Dinh Buddhist temple are the national and cultural heritage of Vietnam.

icon-angle-double-rightHow to travel from Hanoi to Ninh Binh?

Tam Coc in Ninh Binh and the boat trips for the tourists.

Quang Binh – this place is known mainly through the Phong Nha-Ke Bang National Park and the largest cave in the world – Son Doong Cave. Phong Nha-Ke Bang National Park is written in the UNESCO World Heritage List. We can say it is place like Ninh Binh, however, but it is much larger. The starting point if you want to explore these places is Dong Hoi town, located about 50 km from the park and you can get to Dong Hoi by train.

icon-angle-double-rightHow to travel from Hanoi to Dong Hoi?

Whatever your opinion of the movie Kong: Skull Island (I like this type of film), but one thing is certain. The film became mainly in Vietnam big and profitable hit and a month after the premiere (world premiere was March 9, 2017) reported revenue worldwide over 500 million dollars, and this figure is likely to grow.

There was a plane to build the statue of Kong near the Hoan Kiem Lake in Hanoi , but was later rejected for now 🙂 The ratings of the film is also very good, IMDB.com received ratings 7/10 icon-star and on Rottentomatoes.com 77%. On this type of film is very successful ratings.

Ha Long Bay – one of the most visited places in northern Vietnam.

Tourists on the boats in Trang An Scenic Complex in Ninh Binh.

Trang An Scenic Complex in Ninh Binh – one of the filming places of Kong: Skull Island. (This movie set was removed in September 2019).

In Trang An Complex (Ninh Binh) some of the replicas of the film are left. (This movie set was removed in September 2019).

Photos from filming of Kong, director’s profile on Instagramicon-angle-double-down

No. 1 movie in the world. Thankful to all the people who came out, my amazing cast and incredible crew.

This photo was taken in the otherworldly Ha Long bay. One of the most beautiful places on this earth. This was shot directly after I yelled “cut” for the last time in Vietnam on the last day of production on Skull Island. This is me trying to process the fact that it was over.

This is my spirit animal.

Literally my ride to work.

A local crowd has gathered to watch. Once again. I love Vietnam.

Sometimes you have to climb to the top of a mountain during everyone else’s lunch break with @twhiddleston just to get the shot and then make a dumb face when someone tries to take a photo.

The local Vietnamese that we worked with in the Ninh Binh area were all so amazing and so much fun to work with. The scene the shot with brie is one of my favorite things in the film. Most of the crew went to lunch and I stayed back with Brie and we very freely shot this montage with all the local Vietnamese. It took them hours to go through make up and normally people would be exhausted but their enthusiasm was infectious. Brie and I fed off of their energy. I love what they bring to the film and the stories their faces tell.

I’ll take pretty much any excuse to get in the water during shooting. Oh, also – once again look at the beauty of Viet Nam.

Kong just past 500 million at the world wide box office. Whoa. Thank you to everyone who went and supported the film (especially the people of Viet Nam).

Where was Kong Skull Island filmed in Vietnam?

Is Skull Island a real place?

When the Kong: Skull Island was filmed?

How tall is Kong in Skull Island?

How to explore Halong Bay?

How you can book bus/train tickets to Ha Long, Ninh Binh or Dong Hoi?